Stretch Goals Can Put the Impossible Within Your Grasp

Stretch Goals Can Put the Impossible Within Your Grasp

In the late 1950s, Japan was trying to recover from the devastation after the Second World War and focused intensely on growing the nation’s economy.

A large portion of the country’s population lived between Tokyo and Osaka, two cities that were separated by 320 miles of train track. Each day, tens of thousands of people traveled between them, and vast amounts of raw industrial materials were transported on those rail lines.

But the Japanese topography was so mountainous and the railway system so outdated that the journey could take up to 20 hours.

So, in 1955, the head of the Japanese railway system challenged his engineers to invent a faster train.

Six months later, the team unveiled a prototype capable of going 65 miles an hour, making it one of the fastest passenger trains in the world at that time.

But the railway systems head wasn’t satisfied. He wanted 120 miles per hour.

That was impossible, the engineers explained. If a train turned sharply at those speeds, it could get derailed. 75 miles per hour was more realistic.

The trains needed to turn because of the numerous mountains between the cities. Why not make tunnels then? the railway chief asked. Turns out, the labor required to tunnel through that much territory was almost equal to the cost of rebuilding Tokyo after World War II.

Three months later, the engineers unveiled a train capable of going 75 mph, but the railway chief tore into the designs. 75 mph would not transform the nation, he said. An incremental improvement would only yield incremental growth, and the country didn’t have that much time.

Over the next two years, the engineers overhauled every aspect of how the trains functioned. They designed cars to have individual motors. They rebuilt gears to mesh with less friction. Since the new cars were too heavy for Japan’s existing tracks, they reinforced the rail, which also increased stability and added another half mph to the cars’ speed.

Hundreds of large and small innovations made the trains go a little bit faster than earlier.

In 1964, the Tõkaidõ Shinkansen, the world’s first bullet train, left Tokyo along continuously welded rails that passed through tunnels cut into Japan’s mountains. It completed its first trip in 3 hours 58 minutes at an average speed of 120 mph.

By the 1970s, that tech had given birth to high-speed rail projects in France, Germany, and Australia, and revolutionized industrial design around the world.

The Magic of Stretch Goals

Stretch goals can inspire people, disrupt complacency, and promote new ways of thinking. They can put the impossible within reach. Even at individual levels, they’ve helped people lose large amounts of weight or become marathon runners later in life.

But they can also cause panic because people could get intimidated by the size of the goal and think success is beyond their reach. Audacious goals can be terrifying, and it’s often unclear how to start on them.

That’s why it’s important to pair them with S.M.A.R.T. goals—Specific Measurable Achievable Realistic & Timely. If you can break large goals into small, manageable ones, you know what to do when you face an outsized goal.

An example is a stretch goal I set for myself to become stronger and fitter after the second lockdown. Here’s how I broke it down into S.M.A.R.T. goals. 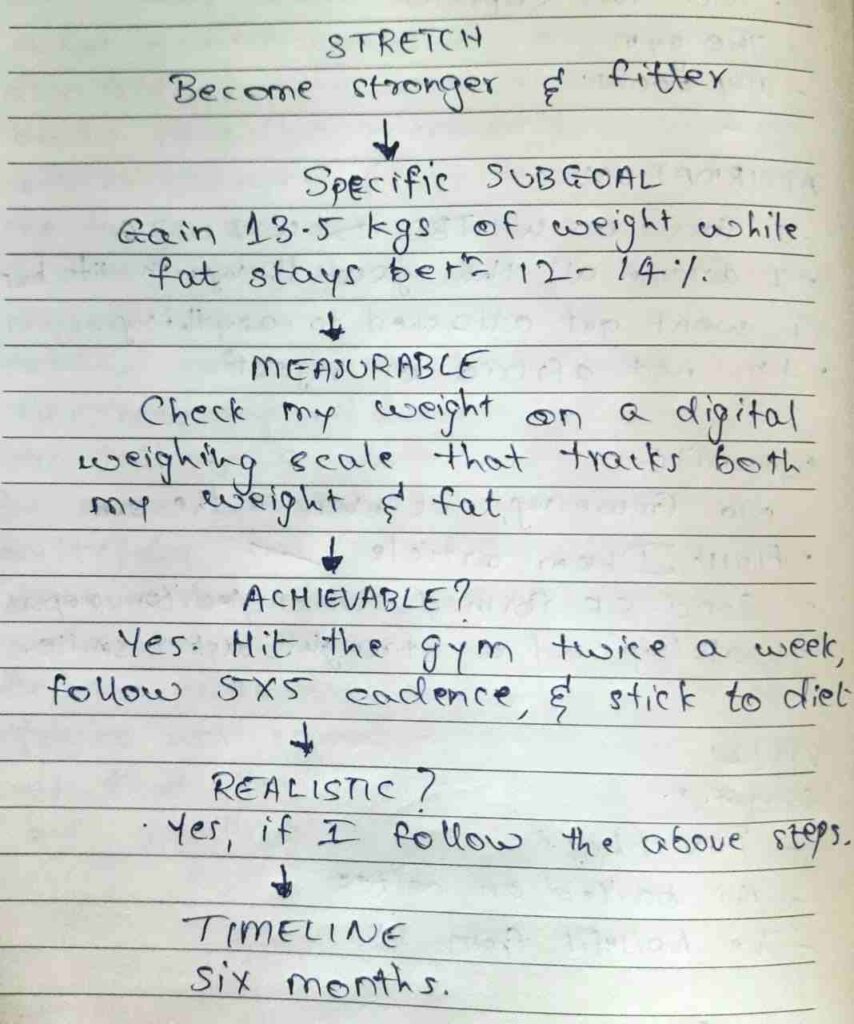 I might not hit the exact 13.5 kg mark within the next 2 months, or I might have to ramp up my food intake. Yet, I’ve come much further than I ever have, thanks to the stretch + SMART goals combo. And if I want to smash my targets, I know exactly what to do.

Pick an outrageous goal that seems beyond your reach. Don’t worry about what others will say if you fail. Don’t lose sleep over explaining how you’ll get there. Instead, break it down into SMART two-week sub-goals. Then get to work.

At the end of every day and every week, review your progress. Ask yourself: Is the current path leading me towards my goal? Are the results what I expected, even if they’re tiny? If not, what should I change to get the desired results?

Keep taking action to stay on track. Even if you don’t achieve the exact goal, you get much farther than most people would.

Subscribe for weekly posts on creativity, productivity, self-improvement, and other topics that help you become better each day. Just enter your email address and click I’m In!

Comments are closed for this article!

Invest in A Meaningful Life

Get weekly insights from artists, entrepreneurs, and experts on leading a more productive life.

*No Spam. I promise.